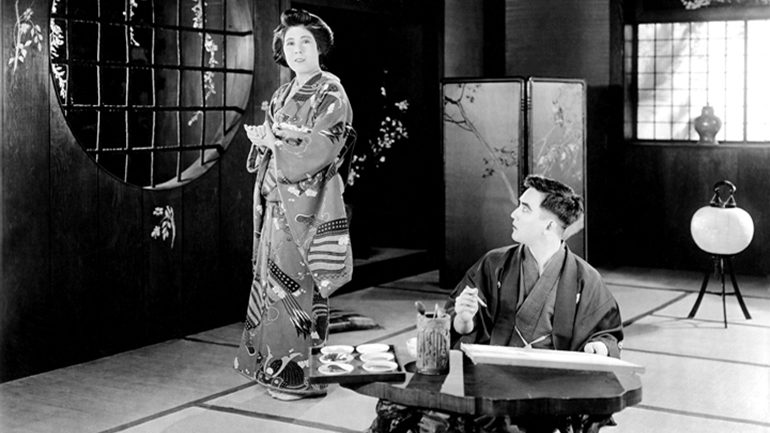 Starring Japanese immigrant Sessue Hayakawa, this early Hollywood silent film is a fantasy romance about love and creative inspiration. Tatsu (Hayakawa) is a reclusive painter who lives in the mountains, painting images of the dragon princess he loved in another life. Tatsu comes to believe the daughter of a wealthy art collector is his lost princess, but as he finds happiness in love, his art begins to suffer.

In his prime Hayakawa was as popular as Charlie Chaplin, as rich as Douglas Fairbanks, and to this day the only Asian American to own his own Hollywood studio. Although set in Japan, the film was shot on location in Yosemite National Park and stars a predominately Japanese American cast, including his wife Tsuru Aoki. Produced by Hayakawa’s own Haworth Pictures, THE DRAGON PAINTER deliberately provides an authentic perspective on Japanese culture that counters the dominant narrative of stereotypes, violence, and melodramatic conflict expected in so-called “Oriental” films of the period. For these reasons we consider it to be one of the first Asian American films in history.

In honoring the legacy of this groundbreaking hundred-year-old film at our 10th anniversary festival, PAAFF has commissioned a new original score to be performed live by Japanese American singer/songwriter Goh Nakamura. Following a brief Q&A with Goh, attendees will enjoy our opening night reception featuring complimentary food and beverage.