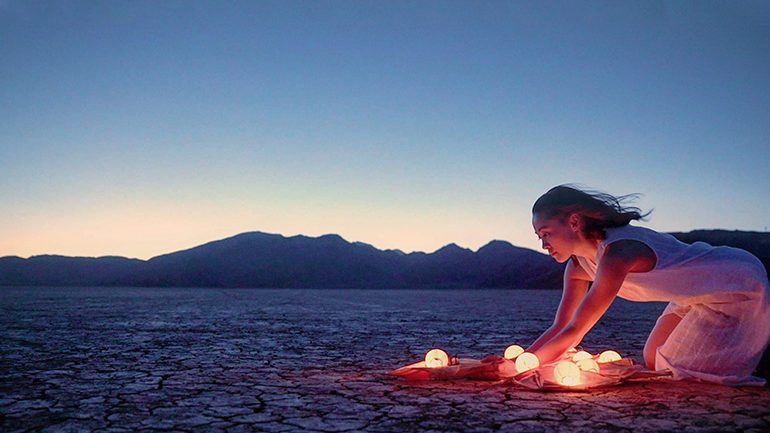 The Smithsonian Asian Pacific American Center brings history, art, and culture to you through innovative, community-centered museum experiences and digital initiatives throughout the U.S. and beyond, as a museum without walls. Recognizing the exciting potential in emerging technology and media, PAAFF and Smithsonian APAC are partnering to present an exceptional experimental short in a special exhibit that offers a glimpse into the future of storytelling

As rising sea levels threaten the loss of their motherland in Hawai’i, the Philippines, China, and North America, four women fight to preserve the volcano, ocean, land, and air for future generations. In a deeply immersive artistic experience, they channel their mothers and ancestors in song, dance, and poetry, and take a bold and ultimate stand against the corruption of the elements and natural resources by humankind.

AFTEREARTH is an immersive three-channel documentary created by a mostly queer, genderqueer, and transgender cast and crew of Asian/Pacific Islander elders and youth.

Producer Adriel Luis is expected in attendance for post-film Q&As throughout the day.

Jess X. Snow is a queer asian-canadian public artist, filmmaker, poet, and educator. She holds a BFA from the Rhode Island School of Design and is currently studying directing in the MFA program for film at the NYU Tisch School of The Arts. As a result of the rootlessness and migrations that marked her childhood, she developed a stutter which she overcame through her discovery of visual and written language.

Her work explores survival, memory, joy, and our relationship to the Earth by amplifying the voices of women, queer people of color, and migrants who refuse to be defined by borders and time.

Her film work has been supported by the Tribeca Film Institute, Adobe, the Smithsonian Asian Pacific Center. Her public art and political graphics have appeared on PBS Newshour, The Los Angeles Times, the UN Human Rights Conference, NBC Asian America, and outdoor walls across the country. She has illustrated children’s books and cover art for Macmillan USA, Yale University Press, YesYes Books, Black Girl Dangerous Press, among others, and her work is in the permanent collection of the Library of Congress.

Through film, large-scale murals, street art interventions, poetry, and youth art education, she is working toward a future where queer, migrant youth of color may see themselves heroic on the big screen and the city walls, and can then face the possibility to grow up and create their own.