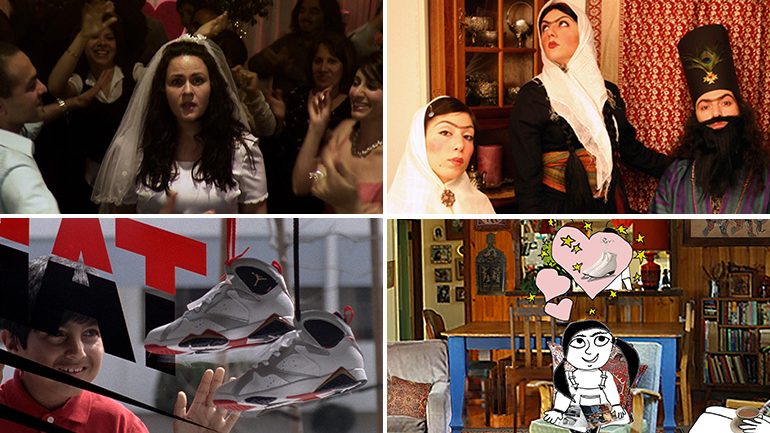 Having a hyphenated identity is more than just being between worlds and fixed identities. It includes the active process of forging a new cultural space—a cultural remix. It is often the work of the first generation after a significant migration to begin establishing the cultural products and institutions to capture that remix. This program of short films is part of that work; an attempt to amplify the voices of diasporic Iranian filmmakers.

SCENT OF GERANIUM
Director: Naghmeh Farzaneh | 5min
Immigration is a new chapter in one’s life, a chapter with unexpected events that can take one life down paths different from the one imagined. This film is an autobiographical account of the director’s experience with immigration.

THE MAGIC SHOES
Director: Sahand Nikoukar | 10 minutes
Nine-year-old Iranian immigrant Kamron can’t seem to fit into the culture of early 90s Los Angeles, forcing him to wonder, is it the shoes?

AMERICA 1979
Director: Lila Yomtoob | 14 mins
It’s 1979, and the Iran Hostage Crisis is in full force. When an Iranian American girl is teased at school for her ethnicity, her family must come to terms with how world politics is affecting their lives.

THE FBI BLEW UP MY ICE SKATES
Director: Sara Zia Ebrahimi and Lindsey Martin  | 7 mins
Based on a true story, the film tells a story from the Iran Hostage Crisis in 1980 from the perspective of Haleh, an eight year old who just wants to enjoy her ice skates.

VIRGIN 72
Director: Bita Nossa | 7 mins
In this hilarious dark tale, Sahar is an angry 12 year old girl, of Middle Eastern descent who seems lost in the world around her. Her family has embraced Western culture, but she hasn’t. And while her peers lean about sex or gossip about other students, Sahar dreams about becoming an Islamic freedom fighter. When this confused young girl is bullied by some of her schoolmates one day she retaliates by building an explosive device. The eventual detonation of Sahar’s bomb produces some startling repercussions.

BRAIN OF TERROR
Director: Shahaub Roudbari | 6 mins
After watching back to back episodes of “Homeland”, an eccentric young woman has a dream that sparks an internal struggle with her ethnic identity.

A RELUCTANT BRIDE
Director: Shideh Faramand | 6 mins
A single Persian woman, still unmarried at 28, must endure disapproval and meddling from married friends and relatives at her younger sister’s engagement party.